This workshop at Lancaster University in March 2009 drew together the artists (Christian Nold, Alfie Dennen, Yara El-Sherbini and Drew Hemment), the curators and researchers at Lancaster University and FutureEverything, scientists from the Natural History Museum and the Met Office, plus other invited participants from the North and East Yorkshire Ecological Data Centre, Transition City Manchester, and one further representative from OPAL (Open Air Laboratories Network) based in Preston. Participants were divided into two groups, one focussing on biodiversity and the other on climate science. In these groups participants brainstormed on ideas for innovative projects and also began to take some joint decisions on some of the practical dimensions of these.

In an extremely short timeframe, but in keeping with an experimental spirit, three trial projects CLIMATE BUBBLE, BIOTAGGING and ONE HUNDRED YEARS OF CLIMATE CHANGE were conceived and developed for the Futuresonic 2009 festival in May. At the festival an Environment 2.0 Open Lab unconference was staged to evaluate the projects, and to explore the theme of designing citizen science and mass participation projects on the environment, biodiversity and climate. 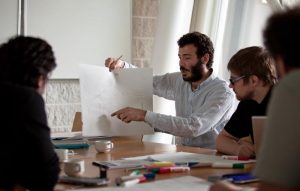 Design and Production for Sustainability