On Friday, 20th April, Imagination’s Dr Leon Cruickshank delivered a forty-five minute workshop at City University in London as part of the AHRC Network funded project, Brief Encounters, which aims to explore ways in which technologies can improve interdisciplinary design processes over distance.

Twenty-one academics, commercial researchers and designers were present, five of which participated remotely through Skype. The workshop aimed to capture details of creative conversations that the participants have been part of within the last four to six weeks. A small team consisting of Leon Cruickshank, Roger Whitham, Gemma Coupe and Laura Morris worked together to design the workshop that Leon would deliver in London.

In order to keep the workshop participants engaged, the team decided to give the workshop a fun and entertaining element and as a result, produced a series of interesting creative conversation prompts that would generate interesting stories.

These prompts were developed into a comic strip theme that would encourage the participants to describe their creative conversations by drawing or writing in blank comic strip cells. The completed comic strips would feed into discussions in the second phase of the workshop around the four themes; the effect of supporting artifacts, different medias, participant’s backgrounds and the overall success of the conversations. 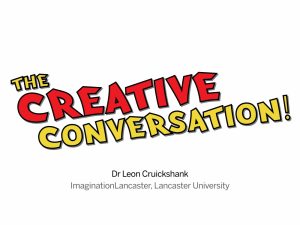