On the 11th of October, we ran the children’s event at the My Mainway Hub, in Captain’s Row, Lancaster. The event brought together 22 participants, 9 children and 13 adults. The event gave the children of Mainway an opportunity to have their say about what sort of social issues they experienced by living in Mainway; a community whose voice is being heard throughout the six-month consultation project.

The Base is a forma shop used for creative activities that seek to engage local people in the re-development of the neighbourhood. Following the successful Door to Door engagement and the drop-in sessions with residents during September, it was time to hear the voices of the children. We designed three creative and fun activities to engage with the children of Mainway.  It was important to find out how they felt about different aspects of where they lived, what their emotional responses are to being in the park, walking down the street, playing outside their homes and being inside their buildings. It was also an opportunity to give them a platform to express their visions for the future, which they did.

It was a warm sunny day, so instead of drawing indoors, a scroll of paper was fixed to the outside shop window. This was the first activity for the children. On the large scroll of paper, the children mapped out their emotional experiences associated with the outdoor and indoor physical spaces shaping Mainway. They drew places that made them feel happy, sad, excited and frightened etc. The outside window proved not to be enough space, so the imaginative ideas spilled onto the pavement through chalk drawings, which were popular with people from toddler up to adult. Some adults helped the children and vice versa. Children helped adults to engage with the designerly activities and with the researchers. When they had drawn on their own or with adults that they had brought with them, we asked them what would make those physical spaces and activities better? By asking this question we guided them towards the next activity, which consisted of making a wooden structure with a cut-out balloon to write a wish on.

When the children had made their wish, they were able to choose where to place the balloon on the model of Mainway that we had made to support the interactions. Some children wanted to express their ideas by writing instead of drawing they chose to communicate using our third activity by making a card and hanging it on our wishing line in the window of the base. The children and the adults that they brought with them generated lots of ideas during the day discussing where new skate parks should go, how beneficial organised games would be like football, where a nature reserve would go, what new play equipment could be used and what diverse activities could happen in a community centre.

Two of the parents enquired about the day’s activities and said ‘will the children be able to come and do this every day?’

The event supported meaningful engagements between children, adults and researchers and brought together a broader audience. Safe places for play were raised in conversation throughout the day as concerns over antisocial behaviour and children playing unsupervised were an issue. There was a variety of basic materials including small wooden components, fixings, masking tape and balloons that were being used for the different activities. The children played with these during and after the activities making signage, go carts and animals that they then added to the model of Mainway. The children were not asked to do this, they were just enjoying developing the activities further on their own in a playful and experimental way. When asked why they were doing that? one of the children said,

“I really like just playing about with things and fiddling with stuff.”

The children making things with the materials, discussed a space to be able to do this and meet friends, to be creative but mostly to be playful.We observed that adults were engaging with the children creatively in a cross generational dynamic through socialising, discussion and problem solving. Together they also established new relationships with each other and passers-by. There was a sense of pride and of place from the people who participated in this activity, it was apparent that given the opportunity they will be motivated to build upon and establish a rich community for the future. 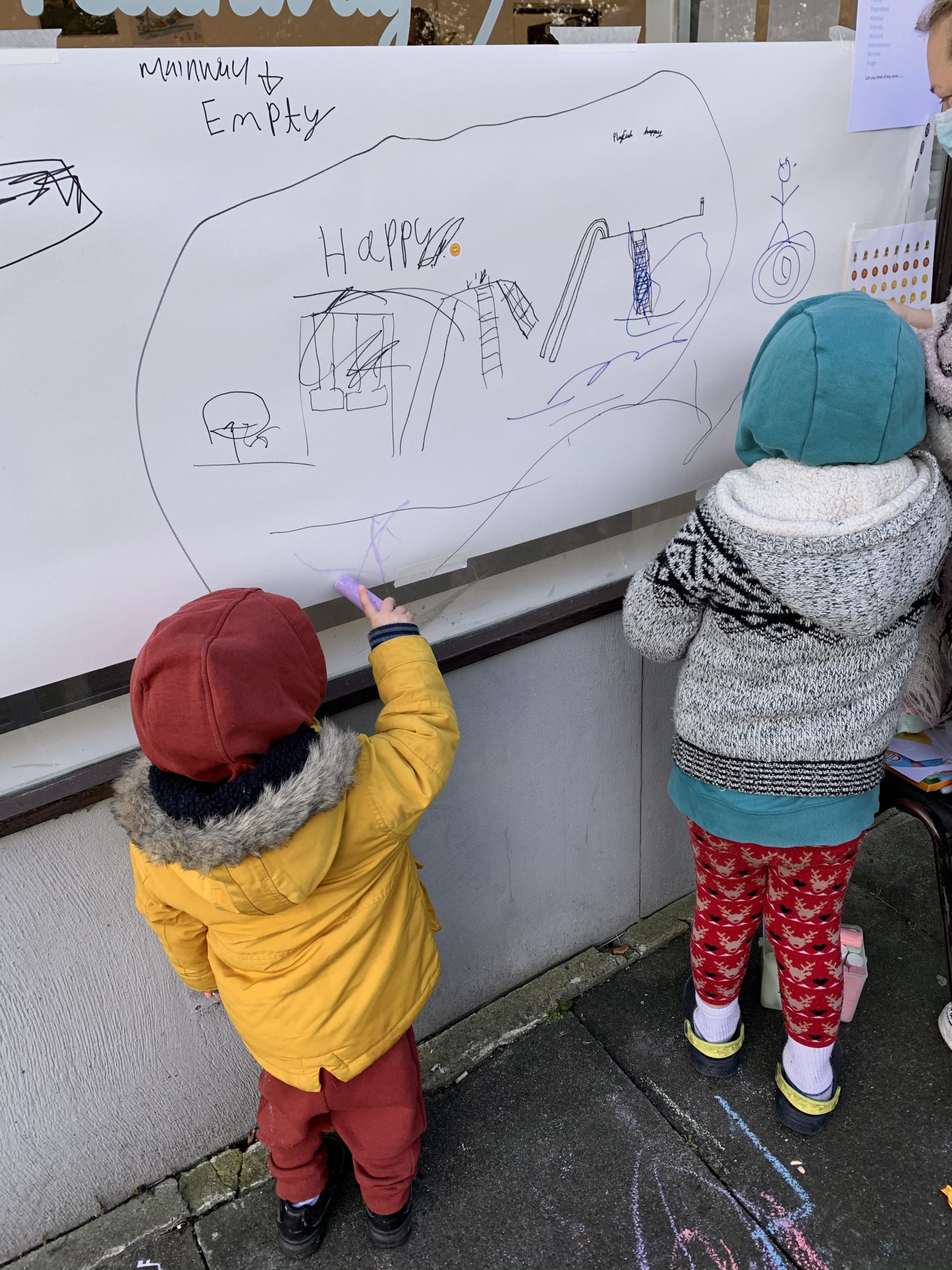 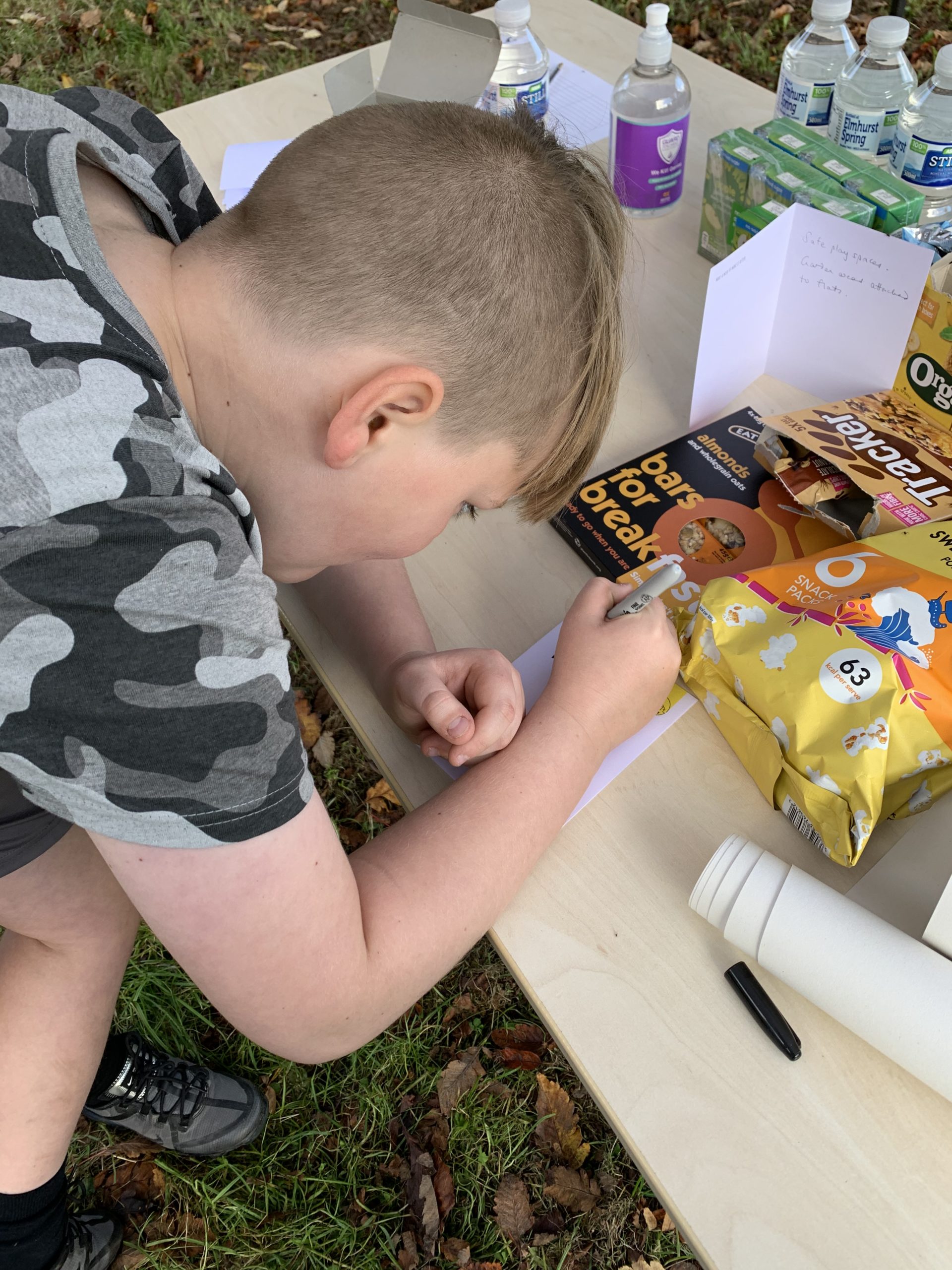 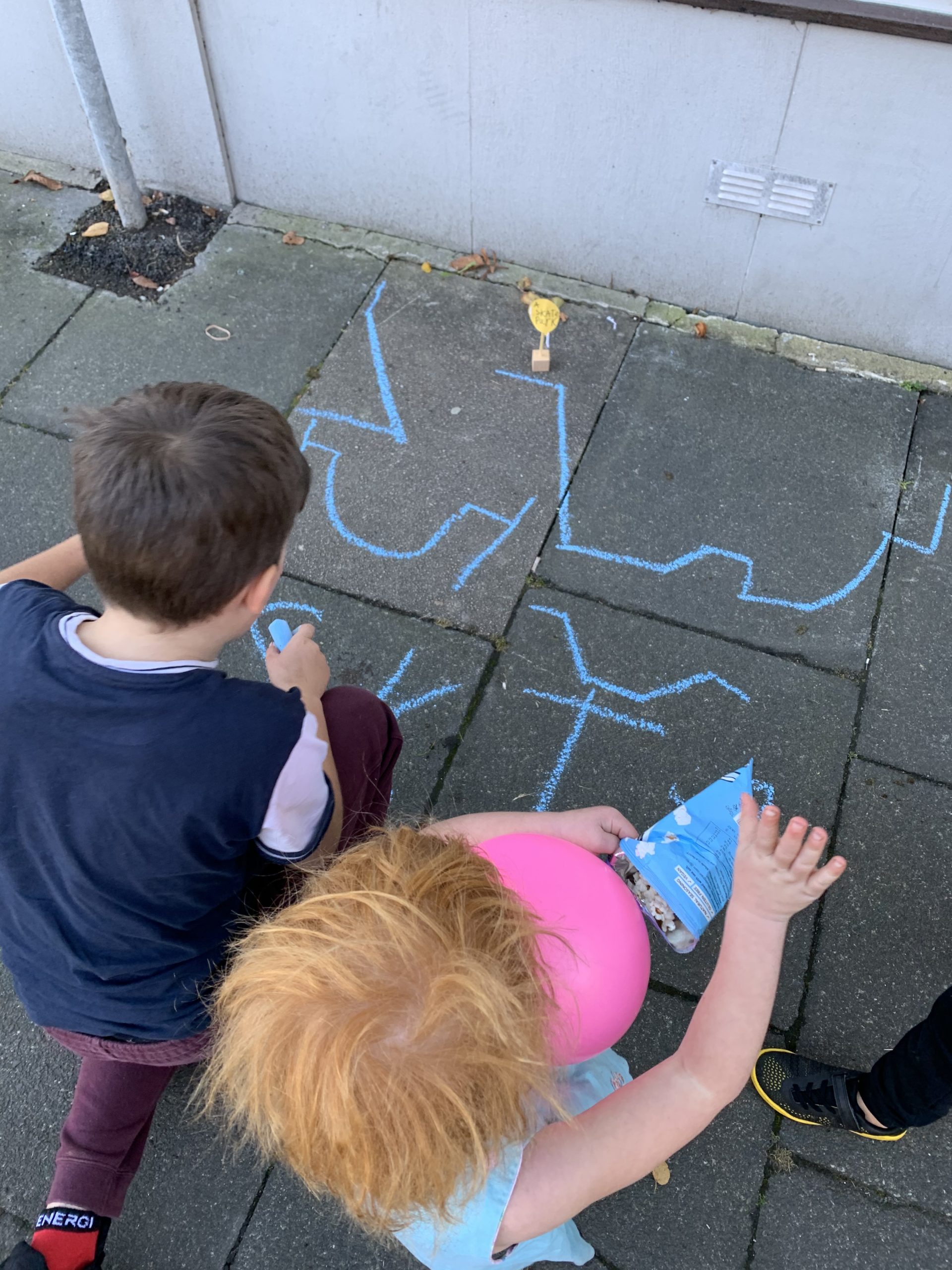 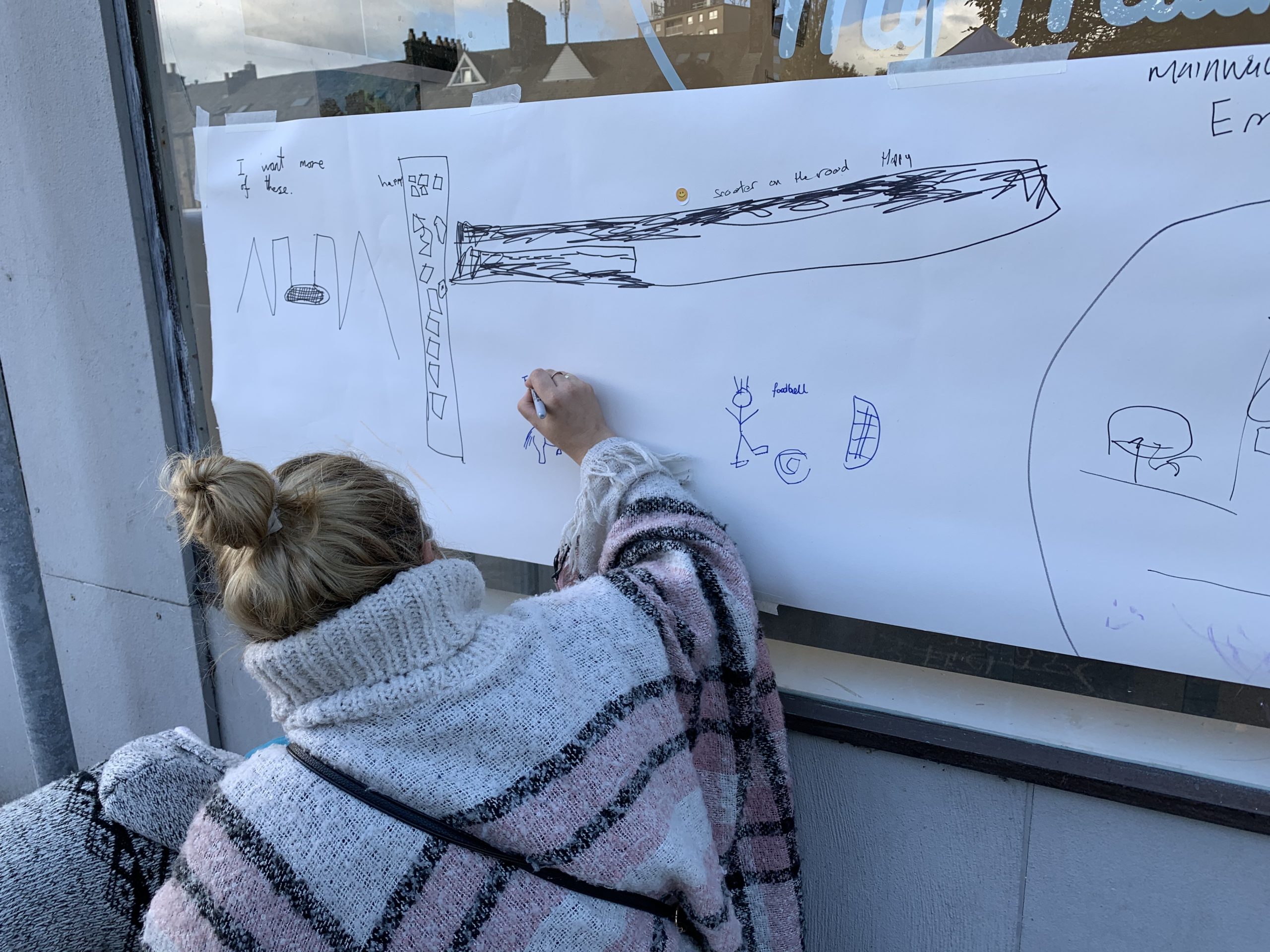 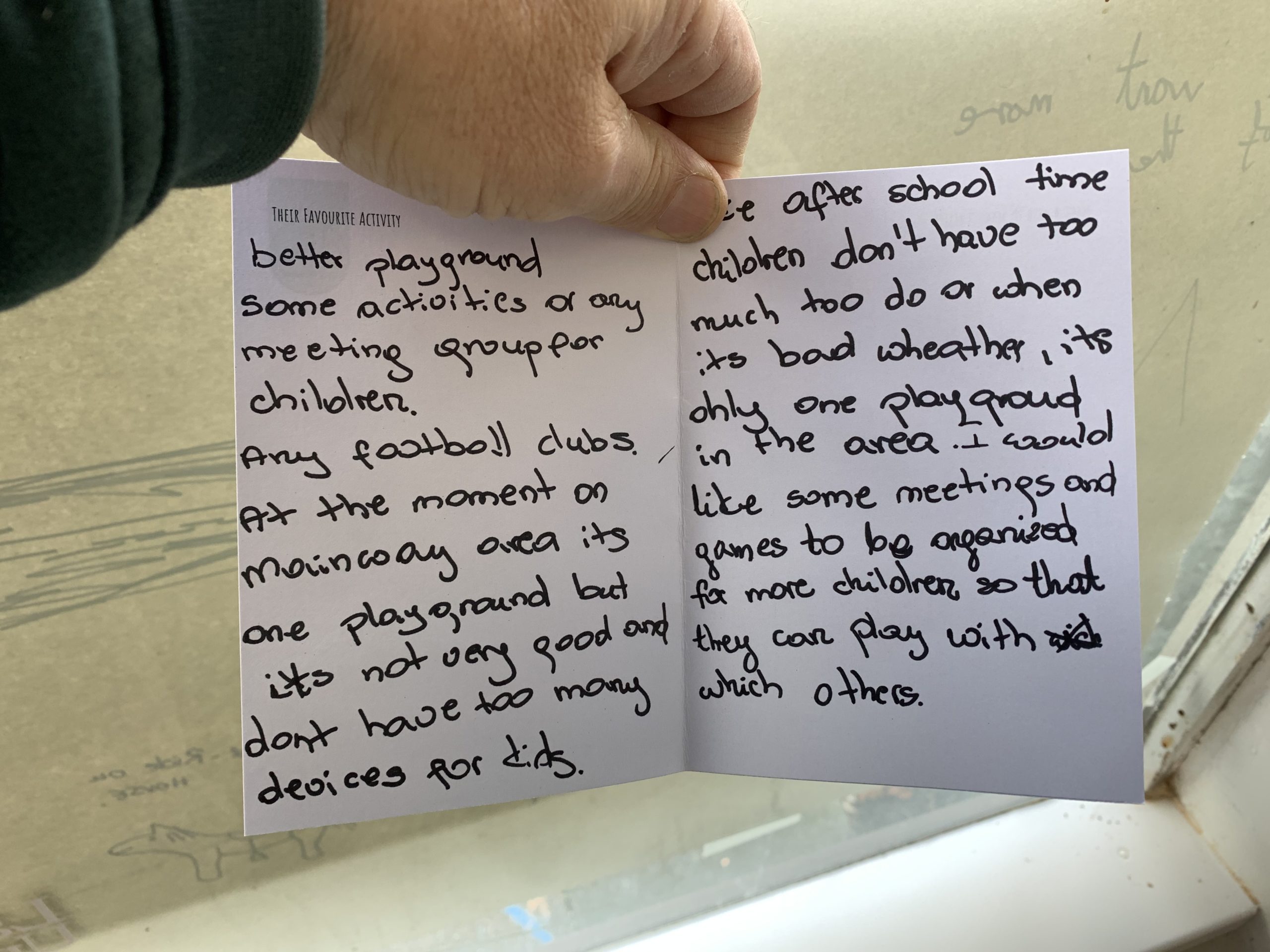 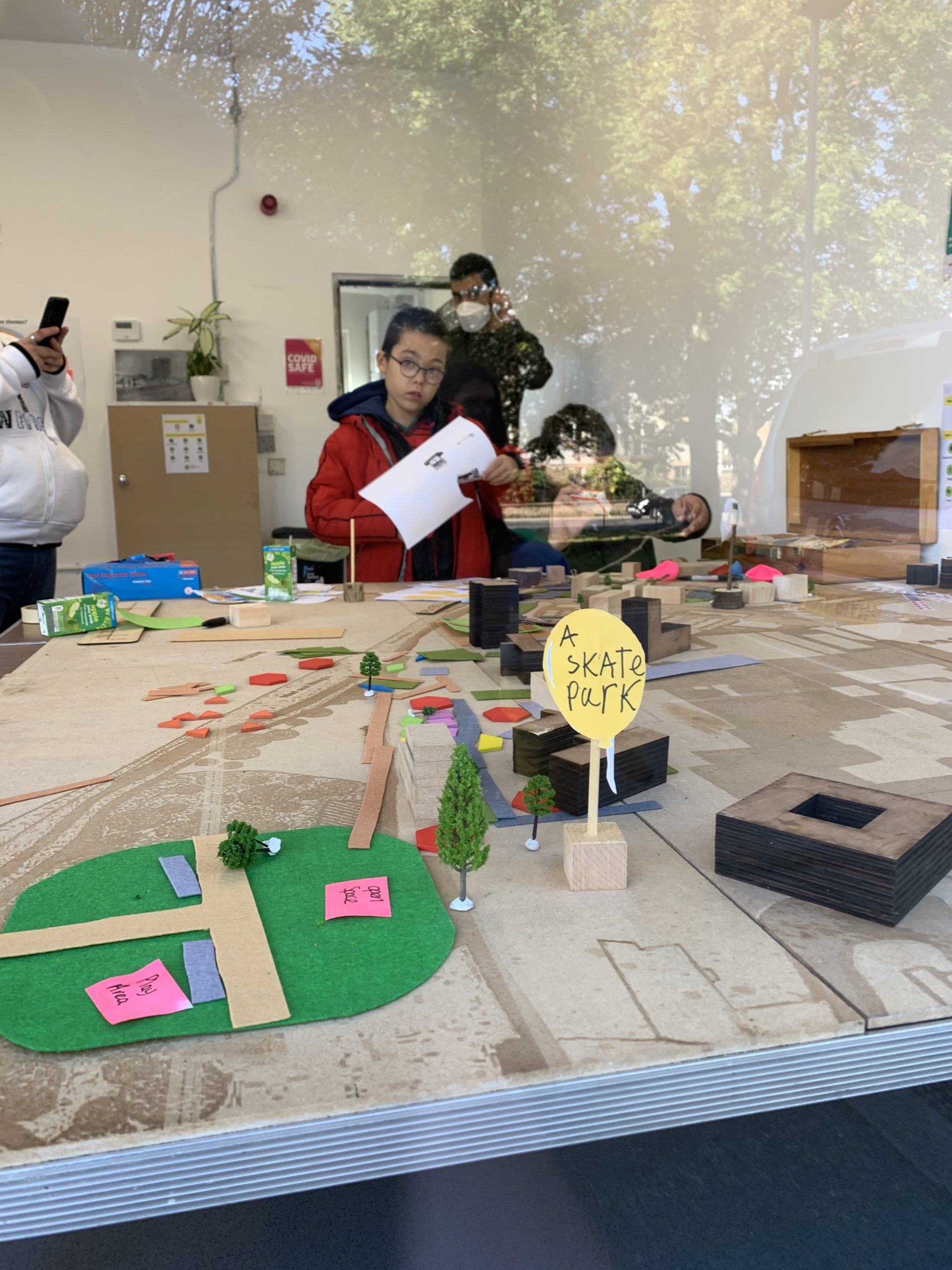