Looking at rapid manufacturing and 3D printing this conference presentation explores the issues fro the design profession and draws comparisons with the aspirations of the Arts and Crafts movement, radical design groups such as Archigram and presents a set of conceptual tools to provoke further discussion

Fundamentally user-centred design has its roots in William Morris and the arts and crafts movement (drawing on John Ruskin’s theoretical work) around the turn of the 18th century. Here the desire to create high-quality furniture affordably specifically for a particular person of everyday means crashed into the limitations of human production and economics. From this time onwards history shows the development of design processes and techniques (and the products resulting from them) that attempt to accommodate multiple customer needs and perspectives in a single form factor or design.

This has lead to more and more sophisticated analysis of users needs and wants and latterly, through user-centred and participatory design a greater involvement of users in the design process itself. We argue that the position of the designer as arbiter of the mass use of a single product iteration is a paradigm in the Khunian sense under threat and in a start of revolution.

The emergence of viable digital fabrication technology for example [ XXXX} and initiatives such as [ XXXX] are fundamentally changing the economic factors that thwarted the socially aware communitarian aspirations of the arts and crafts movement. In parallel developments the recognition and promotion of long established traditions of non-professional design through terms such as Open Innovation (Chesborough 2006), Democratised Innovation (Von Hippel 2005), or Mass Creativity (Leadbetter 2009) have woken many people to the possibilities of directly creating something that conventionally would have been the remit of designers. Examples include the prosaic (business cards, logos, informal websites to the more specialised, sports equipment, medial innovations and housing). These initiatives in themselves have been facilitated by new digital technology, mirroring and co-supporting digital prototyping technology.

In this paper we analyse the implications of the drawing together of these two contemporary cultures with the attendant possibility of bespoke design for the masses. This has transformational potential not just for communities and for collaborations in general but also for design as a practice. There is an urgent need to develop new processes and practices for ‘design-by-non-designers’.

The aim here is not to attempt to restrict the free access to these powerful creative tools, or to police their outputs but to put forward a model to help people express themselves creatively and lucidly and help translate this into viable products, building on the 200 years of design process but radically reinventing this for a new context of the everyman designer-creator. 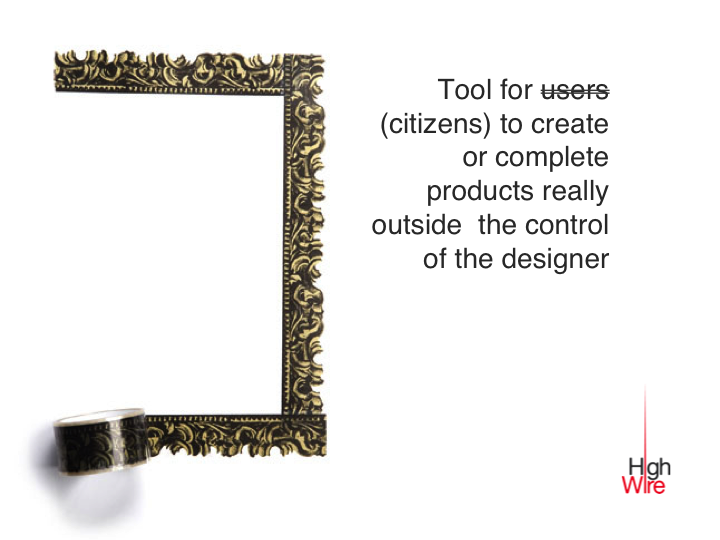