Youth, Democracy and Sustainable Citizenship: Reimagining the City and Empowering Young People through Engagement with Policy-Makers is a research pilot project funded by the British Academy, and the Department for Business, Energy and Industrial Strategy, and framed around the theme of ‘What is a good city? Led by Professor James Sloam, (Royal Holloway, University London, Dr Carina O’Reilly, University of Lincoln, and Dr Mirian Calvo, Lancaster University), the research project combines two case studies: one in London working with the Greater London Authority (GLA), and another one in Lancaster, named Placemaking with Young Adults – led by Dr Mirian Calvo at ImaginationLancaster, Lancaster University (LU), in close collaboration with Lancaster City Council (LCC).

Placemaking with Young Adults phase comprises of a collaboration with an interdisciplinary team of local authority officers from LCC is being run from February to December 2022, and focuses on: (i) understanding what young adults’ views and aspirations are regarding sustainability; (ii) generating spaces where policy-makers and young adults can work together; and (iii) collectively identifying and co-designing aspirations for sustainable policies in the context of Lancaster South and its future development. The participatory research approach aims to build a bridge between citizens and the public sector so that city spaces are envisioned collectively and designed to work for people that live and work in them.

The first step (February – May 2022) consisted of co-developing a placemaking framework that imbued the values and sustainability principles aligned with the climate emergency agenda of Lancaster District. This process comprised collaboration between Lancaster City Council officers and design-researchers. The next step will consist of designing and facilitating placemaking events, which will engender social environments where people can engage collectively.

The development of our own placemaking framework

Project for Public Spaces (PPS, the influential and international consulting group) defines placemaking as the community-based design process that “facilitates creative patterns of use, paying particular attention to the physical, cultural, and social identities that define a place and support its ongoing evolution” (PPS, 2007, p.2). We used the Project for Public Space’s (PPS, 2007) placemaking framework as a starting point to collectively develop our own custom placemaking framework based on the sustainable values and attributes emphasised in the Lancaster District climate emergency declaration, Lancaster District’s People’s Jury on Climate Change report, Lancaster’s Climate Emergency Local Plan Review and the Bailrigg Garden Village Spatial Masterplan Framework. After an iterative process of testing this framework in local urban contexts with members of the research team, we finally devised the placemaking framework for the Lancaster District context as illustrated in Figure 1. 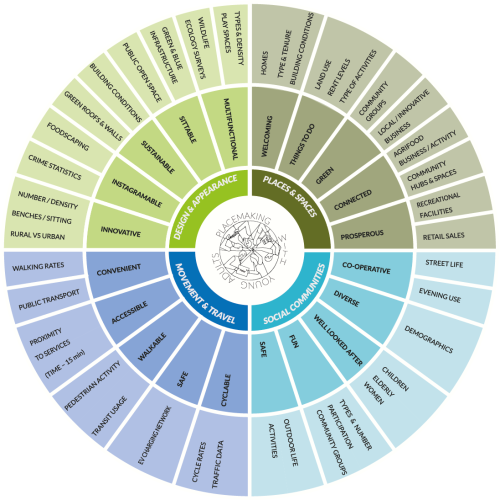 Figure 1: LCC placemaking framework. The inner ring represents the themes. The middle ring illustrates the attributes – these are intangible features of a place that are hard to measure and it requires observation and reflection; they are related with human feelings and emotions, e.g., if a place is welcoming or feels safe. The outer ring depicts the features of place that are quantifiable, e.g., how many women/elderly/children are in a place. Source: Mirian Calvo