Television in the Internet of Things

I had the great pleasure of spending last term on sabbatical within the BBC R&D lab at MediaCityUK to effectively engage in some knowledge exchange between my research activities and those of BBC R&D.

I was particularly interested in how traditional media such as television and radio will adapt as they become part of a larger Internet of Things (IoT). For me, the important aspect of this statement is not that traditional media needs to adapt to the advent of a new technology but rather it needs to see itself as part of a much larger heterogeneous network of objects, which will bring not only new challenges but new opportunities.

From a technical perspective I have heard people say that the IoT is in its ‘Geocities Phase’ as a way of comparing it the early days of the World-Wide Web, which was still highly experimental and largely the preserve of technology enthusiasts. This experimental nature of the current IoT is evident in both in the array of wireless communications technologies (i.e. Bluetooth LE, WiFi, ZigBee, etc) currently utilized for IoT devices but also in the range architectures they employ which are designed to support the development of services utilizing these devices such as: web service devices, virtual cloud devices, and peer to peer devices. It is worth noting that that there are other configurations that blend these architecture characteristics but the main point here is to highlight just some of the challenges of developing IoT systems.

While these challenges are not insignificant I was/am more interested in how we approach the design of IoT systems and services in relation to how users experience such systems. To highlight this I will utilize my favourite approach from the great designer Bill Verplank who describes interaction designers as having to answer three questions in relation to the user: How do they do? How do they feel? How do they know?

If we start with ‘doing’ then Verplank synthesized this down to either buttons or levers that relate to whether our interactions are continuous or discrete. The design challenge is not simply that both are applicable, and available; in IoT it is that we must also consider that they can be implemented as a combination of real or virtual interactions.

In terms of how the users ‘feels’ Verplank considers this in relation to the user’s physical senses and in particular the medium through which the interaction is presented to the user. He draws upon the work of Marshal McLuhan who categorized media in terms of ‘hot’ or ‘cool’, whereby a hot media, such as print, is one that dominates one particular sense absorbing all of our attention and leaves little room for participation, while a cool media (sometimes described as fuzzy) leaves space for participation. IoT objects will allow us to design across a wider range of user senses and thus offer the potential for greater levels of participation but also to create richer storytelling environments. The challenge for design is how to effectively combine these properties in an environment that is likely to be in constant flux.

The final question of ‘how we know’ is described by Verplank in terms of paths and maps. Paths represent the step–by-step instructions that you might typically find in a user guide while maps represent our mental models gained from how we interact with all types of objects and systems and from which new tasks and uses can be inferred. The design challenges relating to these models is arguably the most complex, for as another great designer Don Norman rightly states these models “play very different roles in physical products than they do in the world of screen-based products” and in IoT systems designers will therefore need to consider physical and digital affordances simultaneously if they are to create  effective experiences.

Hopefully I have given a flavour of the type of research I was/am pursuing and I follow this up with more tangible examples of what I worked on. 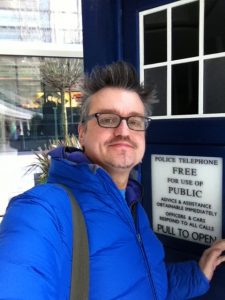