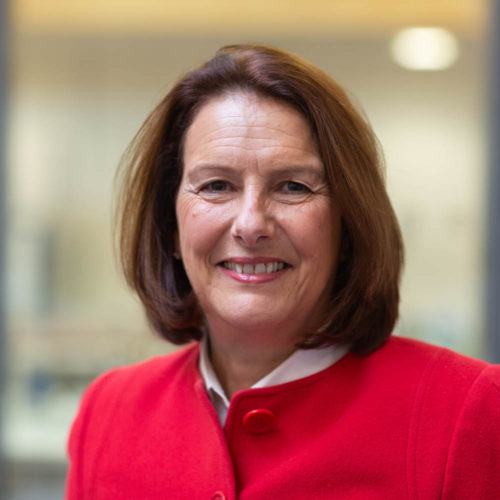 Rachel Cooper OBE is Distinguished Professor of Design Management and Policy at Lancaster University. She is a Director of ImaginationLancaster, an open and exploratory design-led research centre conducting applied and theoretical research into people, products, places and their interactions, and also Chair of Lancaster institute for the Contemporary Arts. Professor Cooper’s research interests cover: design thinking; design management; design policy; and across all sectors of industry, a specific interest in design for wellbeing and socially responsible design. She has published extensively on these topics, including books ‘Designing Sustainable Cities’ and ‘The Handbook of Wellbeing and the Environment’. She is also series editor of the Routledge series Design for Social Responsibility covering topics such as designing for sustainability, inclusivity, service design, sport, health, transport and policy. She was founding editor of The Design Journal and also founding President of the European Academy of Design.

She is currently working on Liveable Cities, a £5m funded six-year research programme working to identify design and engineering solutions that will lead to low-carbon, resource-secure, future cities in which societal wellbeing is prioritised. Also ‘The Creative Exchange’, a £3m three year programme  looking at the growth of the creative industries through exploring the ‘digital public space’ and a new types of PhD’s programme.  She has also just begun work on the recently announced ‘Internet of Things’ (IoT) Hub Lancaster University lead in a UCL led consortium that has received £9.8 million support from EPSRC as part of a £40 million investment programme from UK Government. She is Academic Lead for the N8 universities (the eight most research intensive Universities in the North of England: Durham, Lancaster, Leeds, Liverpool, Manchester, Newcastle, Sheffield and York.) on Urban Living Research.

Professor Cooper has undertaken several advisory roles to national and international universities, government and non-governmental organisations. She was a member of Infrastructure and Environment Strategic Advisory Team of the UK Engineering and Physical Sciences Research Council (EPSRC) until 2005. She has also chaired EPSRC commissioning panels on Crime and the cross council review of UK National Collaboration on Ageing Research programme and she was mentor on EPSRC Sandpits on Mobile Health and Countering Terrorism in 2006/7. She is currently a member of EPSRC Strategic Advisory Network. Professor Cooper was UK Arts and Humanities Research Council (AHRC) panel convenor for visual arts and media practice, history, theory Postgraduate awards between 2000 & 2005, and sat on the Council of the AHRC (2000/10). She was also a member of the advisory panel on the AHRC/ESRC’s Cultures of Consumption programme and chairs the advisory panel for the AHRC/EPSRC’s ‘Designing for the 21st Century’ initiative. She was a member of the UK Research Assessment Exercise Panel for Art and Design in 2008 and 2014 chaired the research review panel for art, design architecture and media for Aalto University, (2009) and is currently chair of Aalto  School of Arts  Strategic Advisory Board and was a member of the Research Assessment exercise for Gothenburg University 2010. In 2011 she was invited to be a member of the European Design Innovation Initiative Leadership Board that produced recommendations on Design for Prosperity and Growth for the EU. She was amember of the Blackett Review of the Internet of Things 2014.

She is a also Non executive Director of the Future Cities Catapult, a visiting Professor at the Royal College of Art (RCA)and a member of RCA Council. Professor Cooper was a Lead Expert for the UK Government Foresight programme on the Future of Cities, is on the Academy of Medical Sciences Working group addressing ‘The Health of the Public 2040’ and is a member of the Partnership for Prevention Sciences Steering Group. She is the Royal Society representative member of the Scientific Committee for Health and Wellbeing in the Changing Urban Environment – an International Council for Science Programme co-sponsored with the United Nations University (UNU) and the InterAcademy Medical Panel (IAMP).

New paper published in the Journal of Artificial Intelligence for Engineering Design, Analysis and Manufacturing

Flourishing in the World

Designing for a Pandemic

Towards Recovery and Resilience

Strategy and Research Plans for 2021

an online film premiere to rival any blockbuster movie

Design for Global Challenges and Goals

New! The Little Book of the Health of Cities

Design for pandemics: a database

Interview with the Major Projects Association

The Little Book of Wellbeing

This little book tells you about research that we did as part of the Liveable Cities project, looking at wellbeing in neighbourhoods.

As a result of a 3-day Communication Symposium held in March 2017 in Lancaster, Liveable Cities has produced a series of informative videos.

the International Symposium on Urban Health and Wellbeing in the Asia-Pacific Region!

Little Book of Design Fiction for the Internet of Things

Design Fiction and the Internet of Things

Pete Rai, Cisco, Mark Prisk MP and Rachel Cooper OBE, meet to explore the potential of connectivity posed by the continued growth of the Internet of Things (IoT)

How sharing can contribute to more sustainable cities

The Little Book of Sharing in the City

MPs briefed on The Creative Exchange

On 24th November The Creative Exchange - a joint project between Lancaster, The Royal College of Art and Newcastle University - held a Parliamentary event exploring the value of creativity in education, artistic practice, industry and local commissioning

Have some interesting stories about sharing? Live in the Moseley and King's Heath area of Birmingham? If so, come to our workshop and share

Interested in making cities more liveable? Have a background in urban design, architecture or design management? This job might be for you!﻿

Official launch of our survey – Collaboration with Innovate UK

Understanding the network of studies related to our project “Design Value: The Role of Design in Innovation”

Kick off meeting of our project "Design Value: The Role of Design in Innovation"

Article about density & design published in The Guardian

Misunderstanding density: Why we are building the wrong sort of cities

Television in the Internet of Things

How to Win in the Age of Now?

An Inspirational Masterclass delivered by the Worldwide CEO of Saatchi & Saatchi, Kevin Roberts on Monday 10th of February

Can we build more enjoyable cities?

For blind and partially sighted people, just navigating around a city can leave them feeling tired, anxious and vulnerable. Can technology make it a seamless, enjoyable experience?

Three mobilities and wellbeing focus groups took place in Heysham, Morecambe and Lancaster during the week of 1 December 2014... with one more to go

Making in the City [3D Printing], offered a successful and acclaimed introduction to the series of Cities Design Jams, by the Imagination team at Lancaster

Forty-five arts and humanities practitioners, academics and funding partners gathered at a N8 event in Lancaster to participate in a workshop that explored how the imagination is being used to influence social and cultural development in the North

Density and Decision-making: Findings from an Online Survey

DeEP comes to Lancaster for the 3rd Consortium meeting - February 2013

We are looking to recruit two university funded PhDs to work on the EPSRC Programme Grant Liveable Cities, Transforming the Engineering of Cities for Global and Societal Wellbeing

The DeEP project has launched itself onto social media

The Little Book of Density

Get ready for The Little Book of Density!

April 2012 sees the launch of the Urban Futures publication, entitled 'The Little Book of Density'

Density as Sustainability Solution in Lancaster

Planning for Density: Density for Planning

Density paper to be presented at international sustainability conference

Findings from an online survey about density and decision-making to be discussed in Vancouver, Canada

Density: It's More than Just a Number

Benchmarking sustainability in cities: The role of indicators and future scenarios

The Urban Futures team meet for two days in Lancaster

Findings from online density survey written up in report

Density survey goes live in May 2011!

Clinicians as service designers? Reflections on current transformation in the UK health services

How 'we' can design futures of connected places

Design Research for the 21st Century

Stimulating reinvention and influencing economic growth across the North

Design Value: The Role of Design in Innovation

Creating New Contexts for Growth in the Experience Economy

Transforming the Engineering of Cities for Global and Societal Wellbeing